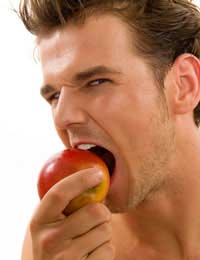 Mouth: The digestive process begins in the mouth. Foodstuffs are broken down mechanically by chewing and saliva is added as a lubricant. Most of the digestion of carbohydrates is completed in the mouth itself.

Stomach: This is where digestive action truly begins. The stomach differs from other GI organs in that it has three layers of muscle instead of two. The epithelium of the stomach forms a series of deep troughs which contain different types of cells involved in digestion. The chief cells, at the base, are responsible for the production of pepsinogen, which breaks down proteins. Further up the troughs, parietal cells produce hydrochloric acid (HCL). This kills most of the bacteria in food and also stimulates hunger. The three layers of muscle are responsible for the churning motion that physically breaks down food.

Liver: The liver has a wide range of important and complex functions these include:

Pancreas: The pancreas makes a number of juices and hormones, including insulin. Pancreatic enzymes assist with food digestion. Insulin controls the amount of sugar in the blood.

Large Intestine: The large intestine reabsorbs water and electrolytes from chyme remaining in the alimentary canal, and also forms and stores faeces. In addition, the large intestine is densely populated with bacterial flora that ferment cellulose and other undigested carbohydrated and synthesize B vitamins and vitamin K.

Absorption and Transportation of Nutrients

The circulatory system carries the absorbed nutrients into the organs. The liver receives all the nutrients from the blood except the fat molecules which enter the lymph stream directly form the intestines. There the fats are assimilated into the body for storage and for energy.

The Dangers of Being an "Apple" Shape