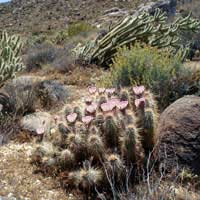 Hoodia Gordonii is the causing the latest buzz in weight loss supplements and may be the best natural cure yet for obesity. Hoodia, also know as South African Milkweed, is native to the Kalahari dessert region, and is believed to contain a substance capable of naturally suppressing the appetite.

Hoodia has a long history. The nomadic San people have been known to use this succulent plant for hundreds of years on their long hunting trips, because of its ability to ward off hunger and thirst. Hoodia was first written about by anthropologist 60 years ago, when it was documented as a thirst and appetite suppressant. The first scientific studies on the plant did not begin until the mid 1980's. It was not until 1993 PhD student at South Africa's Council for Scientific and Industrial Research (CSIR) was at last able to identify Hoodia Gordonii's active ingredient; a steroidal glycoside named "P57".

In 1997 a pharmaceutical company called Phytopharm was licensed the patent for the "P57" extract. Since then the company has spent over $20 million dollars in research on Hoodia. In 2001 Phytopharm completed a clinical study to test the effects of Hoodia Gordonii on overweight adults. The results showed that Hoodia did significantly reduce the subject's appetites and also their body fat content. The larger the doe, the more dramatic the effect was.

According to Phytopharm, Hoodia Gordonii takes effect in a relatively sort time and can show dramatic effects within two weeks, with a decrease of up to 1000 kcal per day.

What is Hoodia Gordonii

Hoodia Gordonii is a slow growing plant that thrives in a relatively limited geographical region. There are also rigid regulations in place controlling its export given its demand and the potential for it to become an endangered species. Bearing these factors in mind and also the fact that there is currently no FDA regulation of the contents in dietary supplements claiming to contain Hoodia, there is room for concern over the validity of the claims of some supplement manufacturers. In fact, when tested, many different brands have been shown to only contain stimulants such as caffeine. Phytopharm, who owns the licensing rights on use of P57 as a weight loss agent, claim that only their product can be shown to contain the natural Hoodia Gordonii chemical constituents for weight loss.

So far the results of animal studies and the few human studies that have been conducted look promising. However further independent human studies need to be conducted to determine what the long term effects of prolonged use of Hoodia Gordonii may be and also what contraindications if any the supplement may cause.