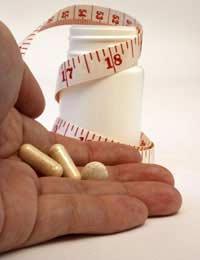 Herbal slimming pills claiming to be 'natural' may sound very appealing. But do they work? There is little or no evidence that any slimming pills that are available over the counter, actually work to produce weight loss. Though you will sometimes come across research which claims to provide such evidence, the results are usually obtained from Many over-the-counter slimming pills do not give you any detailed or reliable information about how they are actually supposed to work. Most of them are also very expensive. If any weight loss does occur it is usually either from following a healthy calories controlled diet while taking the pills or getting plenty of exercise, or a combination of both.

In a recent study, dietician Dr. Carrie Ruxton produced evidence that there is at least one herbal diet pill available in the UK that has been shown to work in clinical trials. Dr. Ruxton's study involved 87 over weight and obese, female health workers. The women, aged between 18 and 70 years, lost an average of 2kg per week and reduced their waist measurement by an average of 3.5cm. A reassessment of the women one month later showed that they had managed to maintain their initial weight loss, and many of them lost even more weight. The supplement that were using is called Zotrim. According to Dr. Ruxton, Zotrim works to combat obesity by boosting the metabolism but must also be used in conjunction with health, balanced diet and plenty of exercise.

In another follow-up scientific study, ultrasound scans revealed that people who were Zotrim felt full for up to twenty minutes more than people without the drug. This made the patients feel more satisfied fro a longer period after they had eaten and so they tended to eat less frequently.

Zotrim contains extracts of South American herbs (mate, guarana and damiana), and it is thought to make you feel fuller for longer after eating. The recommended dosage for Zotrim is two tablets to be taken with at least one glass of water before each meal throughout the day. They can also be taken if you have the craving to eat between meals but you should not exceed 6 tablets per day.

Zotrim is also being toted to help to control the urge to want to eat while going through the initial withdrawals of smoking that usually leads to weight gain as well, as helping you to control eating behaviour.

There are currently only two drugs available in the UK that are specifically designed and licensed for the treating obesity. These are called sibutramine and orlistat. Sibutramine works by boosting levels of your body's serotonin to make you feel more full after you have eaten. Orlistat works by reducing the amount of fat that your body absorbs form food. Clinical trials have shown both these drugs to be effective in helping reduce obesity. They are not prescribed for any other reason.