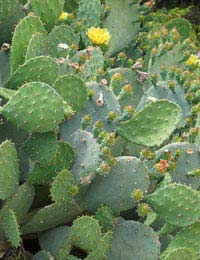 Prickly pears grow with flat, rounded segments that are covered with two kinds of spines; large, smooth, fixed spines and small, almost hair like spines that easily penetrate skin and detach from the plant. Prickly pears species are found in abundance in the Southwest and Western United States, and also throughout much of Mexico. They are the most cold-tolerant of the cacti. This plant has been employed both as a medicine ands a source of nourishment, since prehistoric times, and was traded by various ethnic groups in Mexico and other parts of tropical America, long before the arrival of the Europeans.

Prickly Pear as a Food Source

The sliced or diced tender young pads commonly known as "nopalitos" (meaning "little nopales"), and have been a traditional vegetable in the Mexican diet for centuries, and more recently, a specialty vegetable in the United States and Europe. Usually, prickly pear cactus is consumed as a fresh or cooked green vegetable. The cactus pads, or stems, are sliced, diced and cooked (boiled or broiled) much like string beans, and consumed as a salad or as part of a meal.

How To Peel a Prickly Pear Fruit

Asparagus For Heart and Gut Health